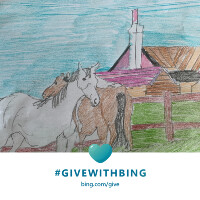 Be the first to donate!

Today, I will be sharing with you how the "Little Iron Horse" became the national horse of Canada and how it inspires us that even through challenging times, we all can pull through and inspire each other to be great speakers and contribute to our city, country, and our world.

The story all begins in the royal commissioned Great & Small Stables in 1665 by King Louis XIV of France, where many royal & working classes of horses were bred and sent around the world to fellow colonies to aid in battle or as royal gifts.

Around 80 of the very best horses were shipped to the colony of New France, Canada during the periods of 1665-1670, though sadly 9 of the horses didnt make the journey across.

As the history rolls along to the end of the Seven Years War in 1673, British colonization of many colonies such as New France, which is present-day Quebec has surprisingly led to new crossbreeding opportunities to enhance the current genetics of hardiness, strong energy with the new bloodlines from America and the British Isles.

Despite the harsh wintry conditions that were brought onto them, they ploughed through the year to bring in the harvest to supply transportation to the settlers of Quebec.

Soon earned a wonderful reputation to many in Canada and south the border for their great strength compared to larger horses, known to many as the Canadian Horse or Cheval Canadien for their wonderful work habits plus the significant role they played in various war campaigns in America. Such as the America Civil War & War of 1812 where over 300,000 horses were employed which in fact was one of the leading causes of why the North won the war as credited by Historian Fran Lynghaugh.

With the many contributions they achieved in America as well with working in the sugar plantations in Jamacia and Cuba which influenced the foundation of many well-known horses such as the America Tennessee Walking Horse, American Saddlebred, Morgan and the Cuban Trotters amazing genetics to trot so gracefully.

Sadly, the population of the well-known Canadian horses population were starting to drop drastically due to the over-exportation which has led to many Federal & Provincial programs aiming to save the dying breed which end up being scrapped due to the rising efforts in World War II.

Canadian Horse Breeding Association was incorporated November 20, 1905, with many breeders such as Brenda Pantling campaigning and preserving the Canadian horses.

After many hard enduring years for the almost extinction breed of the "Canadian or Cheval Canadien has been officially recognized as a national symbol alongside the beaver in May 2002 by the Government of Canada! With many refer to them as the "Little Iron Horse" for its Resilience, intelligence, endurance and of great strength!

Wonderful facts about this strong beautiful intelligent horse that comes in a variety of colours such as chestnut, grey or more commonly black.

Supporting your local horse or pet charities such as the BC SPCA can help save many animals to come, that many will cherish for life. These horses inspire us that even through challenging times, we all can pull through and inspire each other to be great speakers and contribute to our city, country, and our world.